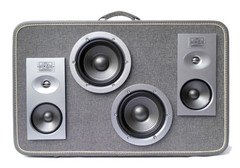 It’s a mystery how it came to be...they say it was hand-sewn by a grandmaster tailor in the 1700’s. Passed down between generations, they say it held the power of persuasion. Given only to those within the most inner circles, The PowerSuit was worn with extreme prejudice and restraint. No one knew for certain of its whereabouts or exactly what it looked like, but when it was worn, it exuded a certain environment, one of power, one of confidence. The PowerSuit was evasive in its mystery, with its audience held captive without being
aware of why. The Powersuit was retired recently, but still creates that same feeling, although now, you may be aware of why.

That shiver?
It’s just your nerves.