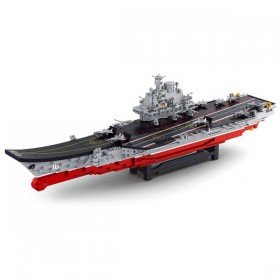 This set contains 1875 building bricks which can be assembled into a 1:350 scale model of the flagship Chinese aircraft carrier, Liaoning.

In addition to the ship itself you also get several small planes and helicopters to populate the deck with. Needless to say this is a very large project, with the finished ship measuring 850mm in length and 220mm in height. Thankfully, to help with this mammoth construction (and save your fingers) a block splitter is included in addition to a comprehensive step by step instruction manual.

IMPORTANT: The box is too large for regular post so the blocks and manual will be packaged separately and sent to you without the original box. If you would like the original box we can arrange for this set to be couriered to you at additional cost.

This set is part of the Sluban range of building blocks. It is functionally identical to LEGO with the most notable difference being the blocks are slightly lighter in weight. As you would expect the blocks from this set are interchangeable with LEGO blocks which opens up a world of possibilities for creating new and unique models.

For those curious the Sluban brand is named after the Chinese inventor Lu Ban, renown for his creativity, and the blocks were first produced in 2004.