Posted by kilroy182 from www.breitbart.com 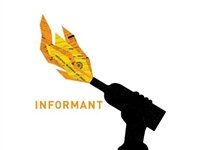 Breitbart News’ Brandon Darby has agreed to debate convicted bomb-maker David McKay at the theatrical debut of the documentary Informant in New York City’s Lincoln Center on September 11.
The film, which has won numerous awards, has been criticized by commentators on both the left and right; the Huffington Post attacked the film for allowing Darby to answer his attackers, while the right has criticized it for allowing attacks on Darby from leftists interviewed in the film to go unchallenged.