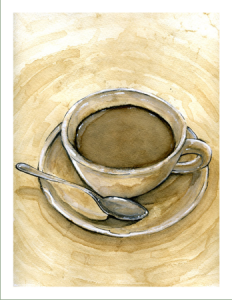 "Right after the war, many gentlemen had lost everything they had, and couldn’t even afford coffee. Now, being that black hot liquid pleasure not considered a treat, but rather a basic human right in the life of any Neapolitan, those gentlemen who could still afford to have one, took a habit of paying for two: one they drank, the other was credited, to be had by the first less fortunate peer who would casually walk in the bar. The bartender would then say: “would you like a coffee, sir?”. Which meant: there is a coffee paid for you, if you can’t afford one. The donor and the recipient would remain anonymous to each other, to protect generosity, pride, and the pleasure of coffee beyond hardships."