Posted by kilroy182 from www.americanthinker.com 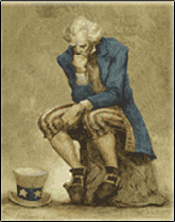 One thing generally overlooked in the uproar over the Washington Navy Yard shooting -- and all other recent mass shootings -- is that guns are being used to shield failed liberal policies. Such policies have been implicated in most, if not all, gun massacres. As is customary when encountering failure, liberals immediately cast around looking for someone or something else to blame, in this case, guns and anything associated with them, including the NRA, the bitter clingers, and so on.
The failed policies they are attempting to protect include: